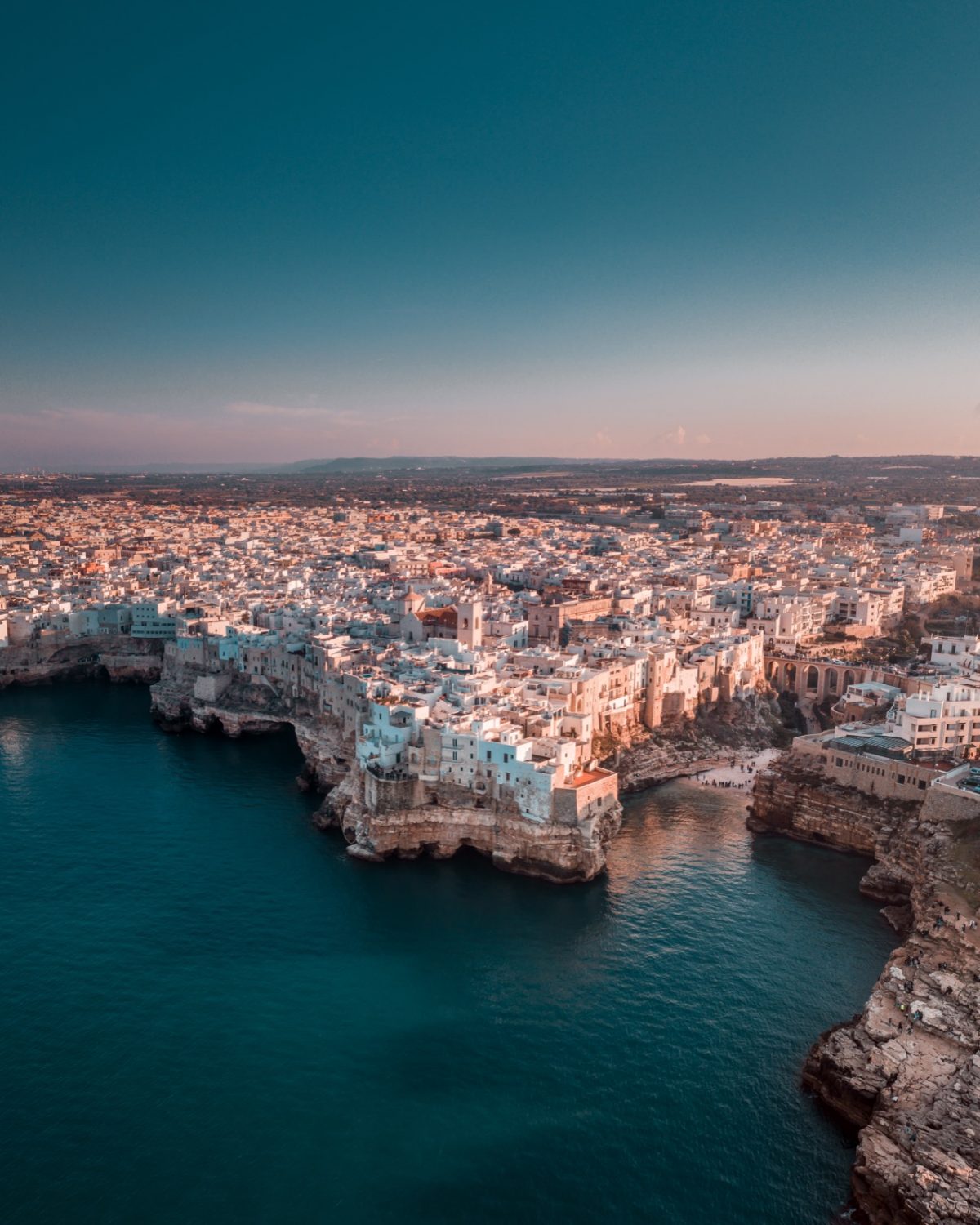 Puglia is a state of mind, let’s get to know the most beautiful destinations together

1) Polignano a Mare: Defined by many as the wedding favor of Puglia, now a symbol all over the world for its cliff overlooking the sea and for the fascinating and famous Lama Monachile beach, which now hosts tourists from all over, the medieval village , perched on the high and jagged coast, has kept its charm unchanged, with a succession of alleys, the typical white houses and loggias overlooking the sea. The elegant waterfront, where you meet the statue of Domenico Modugno, the greatest exponent of Italian music, with open arms in honor of one of his most famous songs Nel Blu Dipinto di Blu.

2) Bari: Do not miss its historic center, among the countless alleys, courtyards and historic buildings, it has more than 30 churches among the most famous, the Basilica of San Nicola, the Romanesque Basilica of San Gregorio, the Cathedral of San Sabino, also present the famous Norman-Swabian Castle, wanted by Frederick II. The waterfront is one of the largest in Italy leading to Bari Vecchia, between the scent of laundry, freshly baked focaccia and fresh pasta put to dry in front of the doors, do not miss Piazza Ferrarese, Piazza San Pietro and the Monastery of Santa Scolastica.

3) Monopoli and the Castellana Caves: Its historic center includes 9 medieval churches and countless cobbled alleys, a few kilometers from Monopoli there are the splendid rock formations and stalactites of the Castellana Caves their formation dates back to about 90 million years ago and represent one of the most important attractions in all of Puglia and a natural heritage of inestimable value for Italy.

4) Alberobello: Unesco World Heritage Site and well known for its Trulli, a type of conical dry stone construction, traditional of central-southern Puglia. These buildings are the refinement of the prehistoric thòlos, present in various areas of Italy, however the trulli are distinguished from them by their continuity of use. Alberobello is divided into districts, the best known are the Rione Monti, consisting of 1030 trulli and the Rione Aia Piccola, an area that includes 400 trulli. Between Aia Piccola and Piazza del Popolo stands Casa Pezzolla, a unique architectural complex of its kind. composed of 15 trulli communicating with each other.

5) Locorotondo: Low whitewashed houses on a hilltop overlooking the Itria Valley. Do not miss the concentric streets of the historic center with the typical houses with sharp roofs and flowered balconies. On the top of the hill on which Locorotondo stands is the Villa Comunale, an obligatory stop in order to admire the expanse of centuries-old olive trees and trulli that make up the Itria Valley.

6) Ostuni: known by all as “the white city” is famous for its completely white houses, to characterize it in addition to this, are also the numerous alleys that make their way between the houses, many of which end in a dead end. Among the major attractions of the city are the Cathedral of Santa Maria Assunta, built in 1400 on the highest part of the city, it is made with a fusion of Gothic style and that of the Venetian school, the obelisk of Sant’Oronzo located at the inside the perimeter of Piazza della Libertà, almost 21 meters high and dates back to around 1771, on the top of the column you can see the statue of Sant’Oronzo, which still protects Ostuni today. Very characteristic are the neighboring cities Cisternino, Carovigno two pearls a few km from Ostuni.

7) Otranto: Also known as the East Gate, it is the easternmost port of Italy. The historic center of Otranto is still well enclosed within the mighty walls. It is a must to visit the cathedral dedicated to Santa Maria Annunziata, a straw-colored stone building with a beautiful Gothic rose window on the facade. The beaches are unique natural wonders. The Porto Badisco bay is famous for being considered the landing point of Aeneas fleeing Troia.

8) Lecce: Among churches, castles, historic buildings and postcard beaches within driving distance, Lecce is also known by many as the Baroque capital of Southern Italy. An open-air museum among the most fascinating in Italy, will make you feel like the first actors of a true Baroque theater, scenic and welcoming. In addition to being a city of art, Lecce is also known for the beautiful beaches of the coast. Do not miss Piazza Sant’Oronzo, with the Roman amphitheater and the seventeenth-century Column of Sant’Oronzo from which the name, the Castle of Charles V, the Basilica of Santa Croce, the Church of San Nicolò dei Greci and the Church of Sana Chiara.

Our structure was designed to accommodate a very large clientele, in fact it has:

Antico Mondo Rooms & Suites is not just an accommodation facility, staying with us means living what is the Apulian experience, let us guide you to discover Puglia …